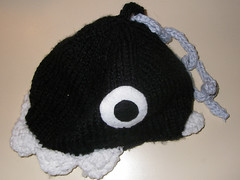 (this should have been for the 22nd January, I'm catching up)

The joy of knitting - the real joy that I never quite predicted until I experienced it - is the look on someone's face when you give them a thing you made. Even when it's something as simple and quick as this hat, most of which I knocked up in the time it took to fly from Boston to London.

It's a Chain Chomp, in case you don't recognise it - those white things are its teeth and when it's sitting on Sam's head, it looks like it's eating him. I wish I had a picture of that, but I don't.

IT'S AWESOME, and Sam's face when he got it was even more awesome.

And yes, I do have enough materials for another one, but I think I'll do something else...
Collapse